Here is The famous and authentic Tunisian dessert recipe of the assidet zgougou. Assida prepared during the Mawlid An-Nabawi, Muslim festival which commemorates the birth of the prophet Mohamed. The celebration of the Prophet’s birthday in Tunisia is linked to the preparation of “zgougou porridge”, which is considered a Tunisian dish par excellence, which housewives can boast of. But who knows how this habit was formed. The porridge is basically a Berber food that the Tunisians inherited from the indigenous people of Ifriqiya (Tunisia). The porridge, which is also offered to the postpartum woman at birth, varies according to the type of flour used, as flour extracted from wheat is used in the north and barley flour in the south, while the tribal homeland is concerned with preparing “zgougou” porridge.

The use of “zgougou” (the fruits of the Aleppo pine) appeared in the late nineteenth and early twentieth centuries. The use of this forest material took place during the drought years that followed the revolution of Ali bin Ghadham in 1864 AD, during which famine spread. And the residents of the northwest discovered in “Zgougou” a food item similar that was used in the Mawlid porridge during those years when the grains (wheat and barley) were scarce. Due to its good flavor and great nutritional features, it has become a dish that Tunisian women masterfully prepare by adding sugar to the recipe, as well as some dry fruits. 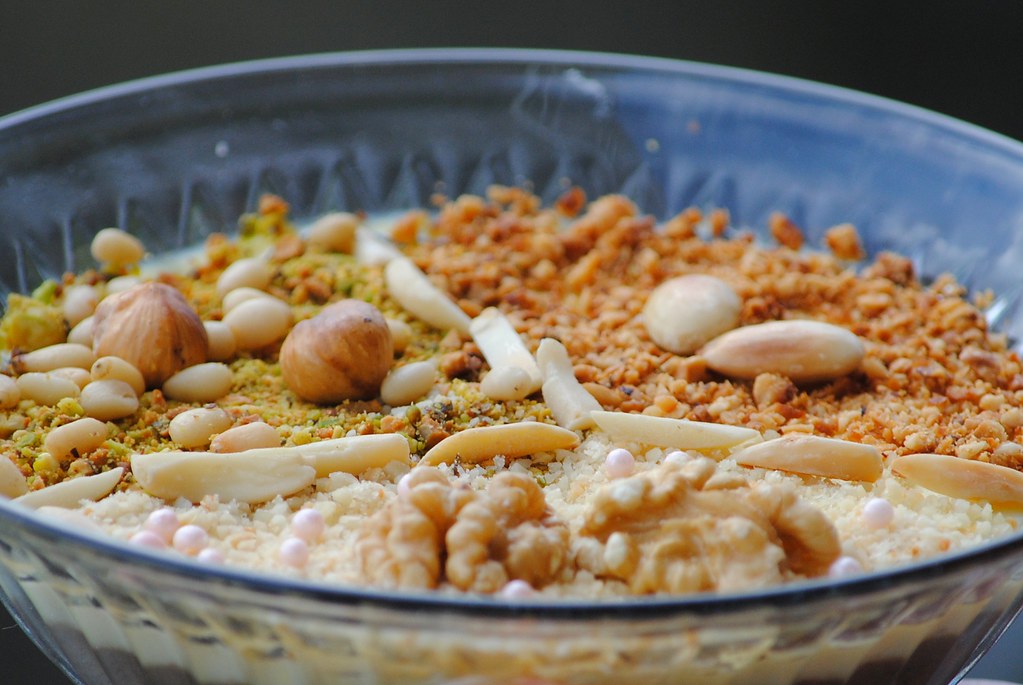 Typical Tunisian tradition, the assida (a kind of porridge based on flour or dried fruit) is prepared throughout the country during this holiday, and offered to neighbors and family. The assidet zgougou (based on pine nuts of Aleppo) is the most widespread, moreover you will not find this delicacy anywhere else in the world.
5 from 1 vote
Print Pin Comment
Course: Dessert
Cuisine: Tunisian
Keyword: zgougou
Prep Time: 30 minutes
Cook Time: 1 hour
Total Time: 1 hour 30 minutes
Servings: 7 people
Calories: 356kcal
Author: Asma

Tunisian Mutabbaq is stuffed bread that resembles the pizza calzone and is characterised by its delicious spicy taste....

There is nothing better than tasting a pistachio Kaak after a long day at work with a cup of hot tea or coffee,...

Asida (Aseeda) is considered as one of the most popular Middle eastern recipes that are made for breakfast and dessert...

Sweet semolina with Raisins or Mesfouf with raisins is a delicious appetizer or dessert that is both nourishing,...

Cheese Savory Cake; this salty cake is a cake that can be served for breakfast or dinner, or alongside your main dish...